i’ve spent my adult life trying not to be materialistic and it’s fairly hard. i think when you grow up with not-a-lot, you can go one of two ways as an adult: you can become miss frugal, the frugalest frugal in frugaltown, or you can become a rabid consumer, rack up debt, have the best toys. i struggle midway between these two. i jokingly blame growing up in the ’80s, generation x, madonna as the material girl and cyndi lauper just wanting to have fun. the spend-spend ’80s can’t help but have had an impact on anyone who was plugged into pop culture, the MTV babies. but as i say, i grew up with not-a-lot and have been a parent now for fourteen years with not-a-lot, seen my own kids struggle with materialism and having aloud the ron weasley tantrums that sometimes happen in my own head. i find compromises. i buy second-hand quality instead of first-hand junk. i’m a review shopper, spending days or weeks researching before i make any major purchases, weighing pros and cons, price and quality. mostly, this serves me well. when i recommend things i own and love to friends and colleagues, they are frequently surprised at the quality, durability, or just plain awesomeness of the thing when they get their own. i consider this a kind of silly skill in my personal resume.

so that’s all a long way of saying that i generally know my shit when i put my money down. when you haven’t got a lot, you make what you’ve got count.

which brings me to my old barn coat. 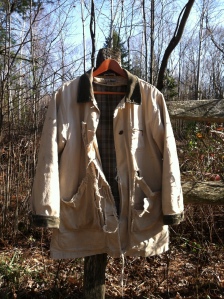 i first met the coat about twelve years ago on a rack at the l.l.bean outlet in concord, NH, marked down to $75. it was probably a return; there was only one on the rack. it was warm like crazy and at the time, i was working on a windswept hill farm with five horse barns, most of which were a long, uphill walk from the rest. to call winters in that job bitter would be an understatement. the farm was fairly isolated, so big storms frequently brought power outages, which meant scooping up five gallon buckets of water for each of the fifty or so horses from the two icy ponds and lugging them up and and down the hills sometimes in the sun, but more often in howling wind and blowing snow. warm was seriously important, so i snagged that deal at the outlet store and began a long friendship with an insulated field coat.

oh, raven, you say, how you do anthropomorphize! well, yes, this is another of my silly skills. but i don’t think i stretch reality too badly when i call that coat a good friend. it has had my back (literally!) for over a decade. it has hauled every conceivable farm item in its many pockets: loaded syringes, eggs, pliers, rusty nails, fence insulators, scissors, baling twine, new screws, four-leafed clovers, hoof trimmings (scavenged after a farrier visit for a dog to eat later), doses of wormer, brushes & combs, bottles & tubs, sprays & rollers, interesting feathers, a handful of hay for a rabbit. come to that, there has been more hay in those pockets than anything else. while it was still in pretty good shape, it carried day-to-day things like lip balm, mobile, and a wallet. these days, i don’t put anything in the pockets that i’m worried i’ll lose because the pockets are more hole than pocket:

the whole coat has been snagged, gashed, torn, shredded, chewed, and crapped upon. the sleeves are tatters from the horns of pet steers.

the hem is stringy from the constant tugging of a no-good goat. (this can be seen as a feature instead of a bug when you need to tie something off in a hurry and didn’t bring any string: just yank one off the hem!) of the twenty or so buttons that came standard, i think ten remain intact. a few are halved. mostly, they’re gone altogether. the corduroy collar is matted and shiny from twelve years of neck juice, which has stained the pale twill brown in the worst case of ring-around-the-collar since Wisk adverts of my youth. there is no modern stain-remover that will remove this. maybe a hydrogen bomb would do the job. 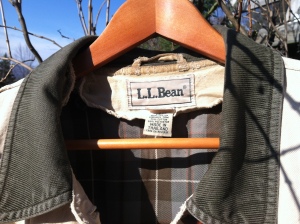 i decided this year that it’s time to retire the old coat. i went to the l.l. bean website. i saw the $169 price tag. i know what kind of quality i’d start with new. after all, this old coat wouldn’t have made it through a third of what it’s weathered if it hadn’t been bean-quality to begin with. but i also started to wonder if i could get one more winter out of the old coat. so let’s find out. after all, from the back, it almost still looks respectable. 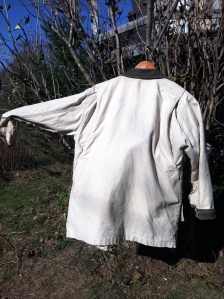 use it up, wear it out, make it do or do without.

One thought on “the old barn coat”

This site uses Akismet to reduce spam. Learn how your comment data is processed.